Modern slavery in your supply chain? 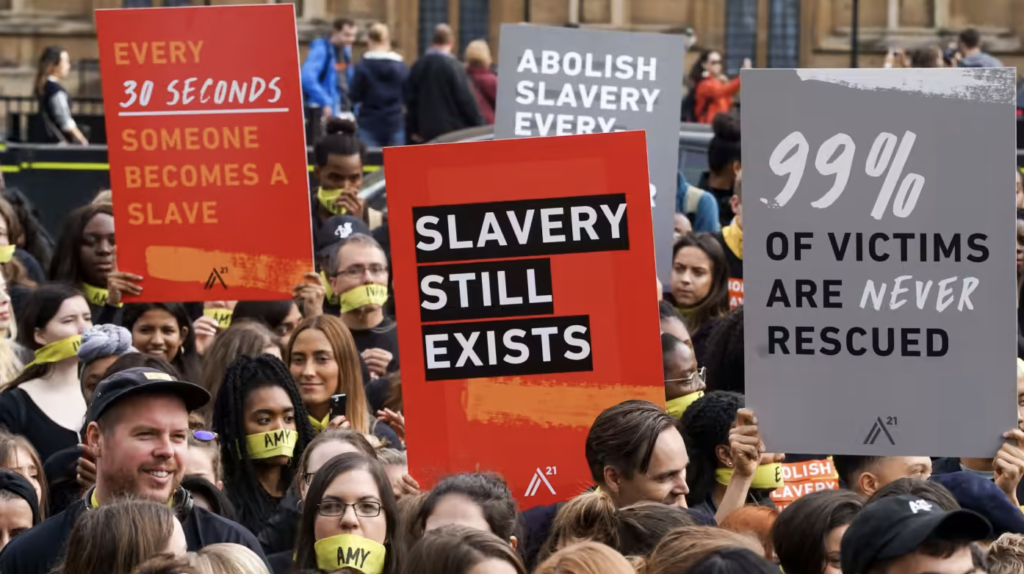 In this awareness piece, we will explore issues surrounding governance, modern slavery, and worker exploitation before clarifying why the living wage is now more important than ever.

Most businesses would assume a resounding ‘no’ to the insinuation of slavery in their supply chain. In truth, it is surprisingly easy for worker exploitation to filter in unnoticed, or unchallenged. Hence why it is vital that supply chain processes are tight enough to ensure that forced labour is impossible to use. Nutral recognises and redresses this risk through an automated due diligence process which protects businesses, suppliers, customers and employees alike.

So, what is ‘modern slavery’?

Put simply: the “fastest growing crime in the world,” it is a shameful reality to be taken seriously.i

In fact, in 2015 the government passed a Modern Slavery Act, proving the gravity of the problem, since legislative change is usually reserved as a ‘last resort’. The Act holds those demanding labour directly responsible, as was demonstrated in 2016 when the civil court’s ruling awarded compensation to 6 Latvian employees of a Kent based gangmaster firm. The potential financial and reputational devastation caused by this is clear warning to other construction companies, leading employers such as Balfour Beatty and Force One People to implement the Supply Chain Sustainability School’s ‘People Matter Charter.’ The charter consists of eight commitments to conscientious treatment, including ‘Skills and training,’ ‘Living Wage,’ and ‘Labour exploitation’ to name a few, indicating dedication to real change.ii

“What is ‘modern slavery’?

Put simply: the ‘fastest growing crime in the world’, it is a shameful reality to be taken seriously.”

Further proving modern slavery to be a pervasive problem is the continuation of STOP THE TRAFFIK (STT). Initially founded in 2006 as a temporary campaign to coincide with the bicentenary of the Abolition of the Slave Trade Act (1807), the charity now tackles modern slavery on a global scale.

Assumption: The main source of modern slavery in the UK is sexual exploitation.

Reality: In fact, more cases are linked to labour exploitation.

Another: worker exploitation most effects those most socially vulnerable, i.e., women, right?

Wrong, in fact, 80% of individuals exploited through labour are male.iii

Moreover, typically male-dominated sectors, namely Construction and Agriculture, have been identified by the Independent Anti-Slavery Commissioner as especially concerning within the UK, with both sectors advised to better tackle issues of modern-day slavery.iv

But surely, you think, legislation is in place to protect those currently in work?

Due to the arbitrary nature of ‘work,’ legislative loopholes still exist, and those overlooked by the law are vulnerable to exploitation. For example, currently, despite promises to protect workers under a new ‘watchdog’ in June 2021, the UK government has effectively refused to abolish ‘zero rights employment’ for freelance workers, by denying workers inside IR35 employment rights. This results in them paying up to 30% more tax – clearly unfairly punishing self-employed workers.v

“The UK government has effectively refused to abolish ‘zero rights employment’ for freelance workers, by denying workers inside IR35 employment rights. This results in them paying up to 30% more tax – clearly unfairly punishing self-employed workers.”

STT began collaborative work with the Construction industry, among others, to outreach directly in 2018. This kind of proactive action is indicative of STT’s data-led solutions. Through identifying problematic industries and tackling these specifically, STT hopes to implement preventative methods to eradicate modern slavery. The work of STT exposes the flaws in current legislation.

Justine Currell, Executive Director of Unseen, (a UK-based anti-slavery charity founded in 2008) highlights that a move from ‘box-ticking’ and towards transparency is the key to progressing and mitigating the risks of worker exploitation. Currell’s claims have credence, since, according to CIPS’ 2016 data, 72% of businesses “have no visibility beyond Tier 1” – demonstrating a clear lapse in supply chain security.viii

Sedex, a trade membership organisation which enables companies to source responsibly and sustainably, recognises transparency as a priority, placing it second of four key objectives.ix

So, if transparency is needed, let’s be clear on the current socioeconomic circumstances facilitating the exploitation of UK workers.

The rising cost of living has been well publicised since fuel prices skyrocketed. Coinciding with an already-suffering post-pandemic economy and increases in National Insurance, low- and mid-income individuals are feeling the strain. According to the Office of National Statistics (ONS), nearly a quarter of adults reported that it was difficult or very difficult to pay their usual monthly bills compared to last year, showing how rapid and vast the effects have been.x

“According to CIPS’ 2016 data, 72% of businesses ‘have no visibility beyond Tier 1’ – demonstrating a clear lapse in supply chain security.”

Without greater support from the government, employees will be stretched to their limits, working excessive hours with few or no breaks to make ends meet. Testament to how uncontrollable the situation has become, Martin Lewis, founder of MoneySavingExpert, has warned that the UK is “not very far off civil unrest” due to the rising cost of living.xi

Adults across the UK have reported the following as the main causes of elevated living costs:

– The price of groceries

Due to data which has found housing, fuel and power to be the “least income-elastic category of spending,” these costs are likely to disproportionately affect those living in areas of greater deprivation. Clearly, those receiving a lower income need the living wage more than ever before.

“Without greater support from the government, employees will be stretched to their limits, working excessive hours with few or no breaks to make ends meet.”

What can we do?

Collaboration with organisations such as STT can provide information on risks of exploitation within supply chains.xii

Achilles started out in 1990 hoping to drive a new kind of procurement, and now successfully serve over 100,000 suppliers globally. They recommend that companies familiarise themselves with current legislation and Home-Office guidance, because poor practices “may provide a gateway to more serious forms of labour abuse.” Their report, specific to the UK, found three key issues to be prevalent in their ethical audits:

In some cases, Achilles found that workers were receiving deductions of 25% of their weekly wage.

25 seems to be the magic number here, with just over (26%) 25% of companies not proving the appropriate right to work documentation, and just under 25 million people worldwide being in forced labour.

Supply chain management is increasingly being recognised as strategically significant for the ethical progression of many companies. Nutral recognises and facilitates this approach, being a data-driven business, which enables growth socially and economically.

See what Nutral can do for you